France has denied breaching a UN arms embargo after four of its anti-tank missiles were found on a base loyal to a rogue Libyan general.

The country’s defence ministry says the “unusable” US-made Javelin missiles were never intended to be passed to any group, and were due to be destroyed.

However, they were discovered in a camp south of the capital Tripoli, used by forces loyal to General Khalifa Haftar.

Gen Haftar’s forces are currently fighting for control of the city.

The battle for Tripoli – home of the internationally recognised government – began when Gen Haftar’s forces launched an attack in April, with hundreds killed in the months since.

The four missiles were discovered in June when forces loyal to the UN-backed government overran the camp, prompting an investigation in Washington.

France admitted the weapons – which can be used against tanks and other vehicles – belonged to them in a statement on Wednesday.

“These weapons were for the protection of forces undertaking intelligence and counter-terror missions,” the defence ministry statement said.

It added the missiles were “damaged and unusable” and “being temporarily stocked at a depot ahead of their destruction”.

Libya has been torn by violence and division since long-time ruler Muammar Gaddafi was deposed and killed in 2011.

No authority has full control over Libya and the country is extremely unstable, torn between several political and military factions, the two most important of which are the UN-backed Government of National Accord (GNA), led by Prime Minister Fayez Mustafa al-Sarraj, and Gen Haftar’s Libyan National Army (LNA), based in the eastern cities of Benghazi and Tobruk. 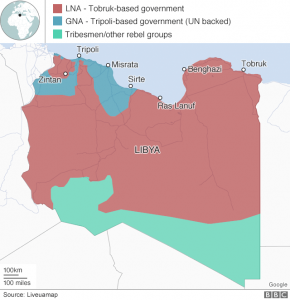 The general has been active in Libyan politics for more than four decades and was one of Gadaffi’s close allies until a dispute in the late 1980s forced him to live in exile in the US.

Both the LNA and GNA have international backers.

Gen Haftar’s LNA has long had the support of Egypt and the UAE, but now also counts Russia and Saudi Arabia among his backers.

Be Civil and Law Abiding- N/R NPP to NDC