He said the Asantehene’s contribution to national development through education and other initiatives had not been limited to his traditional authority but the entire country.

At the Akwasidae Kɛseɛ grand durbar last Sunday to mark 20 years of the Asantehene’s enstoolment, the President said  Otumfuo Osei Tutu’s role in bringing lasting peace to Dagbon, his promotion of a united Ghana and his educational initiatives were worth celebrating.

President Akufo-Addo was the Special Guest of Honour at the durbar that drew thousands of Asantes and other well- wishers from the country and abroad to Dwabrem at the Manhyia Palace.

He attended the rich cultural event with his wife, Mrs Rebecca Akufo-Addo, the Vice-President, Dr Mahamudu Bawumia, and his wife, Samira, and other government officials.

Traditional rulers including the Yaa-Naa Abukari Mahama II, the Paramount Chief of the Bawku Traditional Area, Naba Asigri Abugrago Azoka II, and the Awomefia of Anlo, Togbi Sri III, also graced the event
It was a sight to behold when the Yaa-Naa rode a horse to Dwabrem, accompanied by scores of his chiefs and subjects amid drumming and dancing. 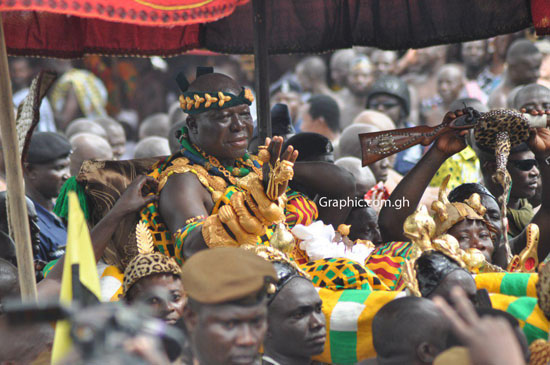 The huge gathering burst into cheers when Otumfuo Osei Tutu, awash with pure gold, rode majestically in a palanquin from Apagyafiem to the durbar grounds, a distance of about 1km amid the firing of muskets.

As he made his way to the Dwabrem, he danced to fontonfrom.

When the King eventually sat in state, the President, other invited guests and well-wishers, took turns to pay homage to him. 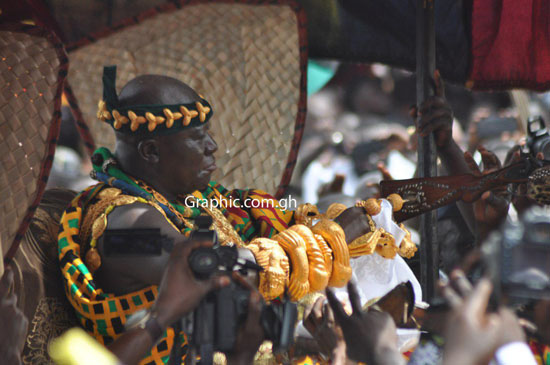 President Akufo-Addo, who spoke in Twi, said the Asantehene’s contribution to national development since he acceded to the Golden Stool had been phenomenal.

He said it was, therefore, no wonder that many travelled from far and near to extend befitting congratulations to the King on his anniversary.

He asked God for more blessings on the Asantehene and more years to his reign so that the nation would continue to benefit from his works. 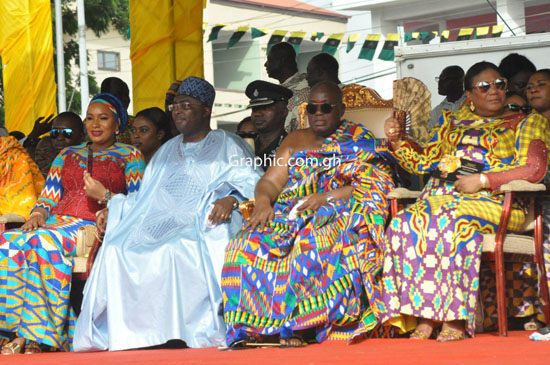 Otumfuo Osei Tutu, who sought permission to speak in English, renewed his commitment to work in tandem with the government and other partners to enhance Ghana’s socio-economic development.

He said similar commitments across the nation would help the total development of Ghana.

He said traditional rulers, being the frontline leaders of the people, should be the ones who should inspire and encourage people for development.

Otumfuo Osei Tutu said over the years, the responsibility for the economic development of the people was left exclusively in the hands of the government.

But on acceding to the Golden Stool, he sought to change the status quo, making traditional rulers key partners in development.

He said there was the need to give opportunities to sons and daughters at home and abroad with the capacity, creativity, innovation and enterprise to make a meaningful contribution to development. 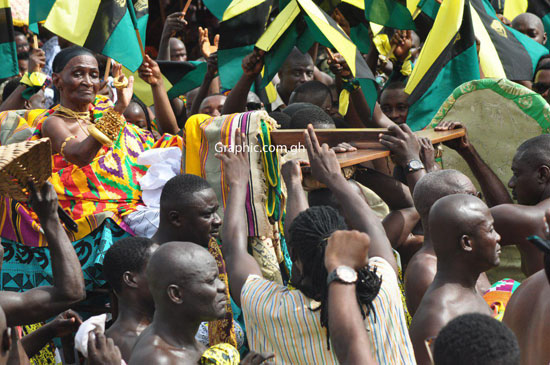 The Asantehene called for a spirit of a resurrected and resurgent Ghana, united by a common heritage and peace.

He said the presence of Togbi Sri III and his kinsmen at the Akwasidaekese, the first ever, provided a clear signpost of a new state that was brewing in Ghana.

He said political differences had plunged the relationship between the two states and it was time that politicians were not allowed to undermine the bond that had existed between the two since 1824.

“Last year, I invited the Awomefia of Anlo state, Togbi Sri III, to come for us to ponder over the curious state into which political differences have plunged relations between our two people.

We concluded that there was absolutely no reason why politics should be allowed to undermine the state of amity that has existed between Asante and Anlo since 1824, on which we formalised when King Otumfuo Kofi Karikari and the King of Anlo entered into a sacred pact in 1865, never to lead war against each other.

“That pact led to the establishment of the Anloga community, which still thrives in Kumasi.

Today, Togbi Sri and his entourage are back with us to re-affirm our cherished friendship and remove any artificially contrived discord with the potential to undermine the stability of our nation,” Otumfuo Osei Tutu stated.

The Asantehene said by extension, the country must remove any artificially contrived discord likely to undermine the stability of the nation. 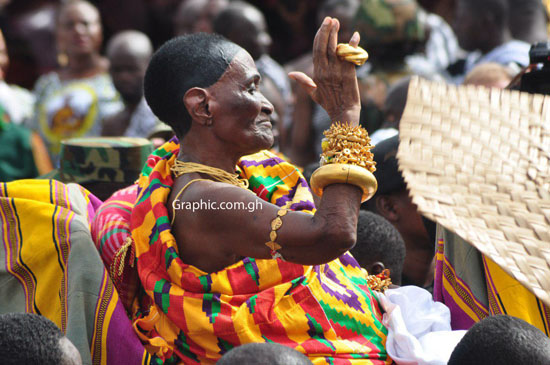 Otumfuo Osei Tutu said his 20 years reign had been fulfilling and challenging.

“Many are the people who have been with us along the journey, who have contributed with all their might and resources to support and sustain our efforts.

I pay tribute to nananom Amanhene and Abrempong for their steadiness in sustaining the unwavering unity and loyalty to the Golden Stool,” he said.