Zimbabwe’s main opposition group has called off anti-government protests in the capital Harare at the last minute, after failing to overturn a police ban.

However, some protesters who had already gathered in the city were violently dispersed by police.

The demonstration was called in protest at the government’s handling of the economy, but police said they had evidence it could turn violent.

There is a heavy police presence and the city centre is subdued, with most shops closed.

About five million Zimbabweans are in need of food aid, according to the UN.

The country has been hit by power cuts and rising inflation.

What happened when the ban was introduced?

Police announced they were banning the protests on Thursday evening.

The opposition Movement for Democratic Change (MDC) applied to the High Court to overturn the ban, but it was upheld by a judge on Friday morning.

Speaking to journalists after the court decision, MDC deputy leader Tendai Biti said the party would not appeal, but added that the ban had exposed the government’s “true colours”.

“The constitution guarantees the right to demonstration… yet this fascist regime has denied and proscribed this right to the people of Zimbabwe,” he said, quoted by Reuters news agency.

“We have jumped from the frying pan into the fire after the coup… We don’t accept the conduct of this regime, the conduct of [President Emmerson] Mnangagwa.”

Mr Biti said that protests planned for next week in other cities would still go ahead.

Some opposition supporters had already gathered by the time the MDC announced the suspension.

But police quickly moved in to disperse the crowds.

Video and still pictures from the scene show officers beating protesters with batons as they chased them from the streets. 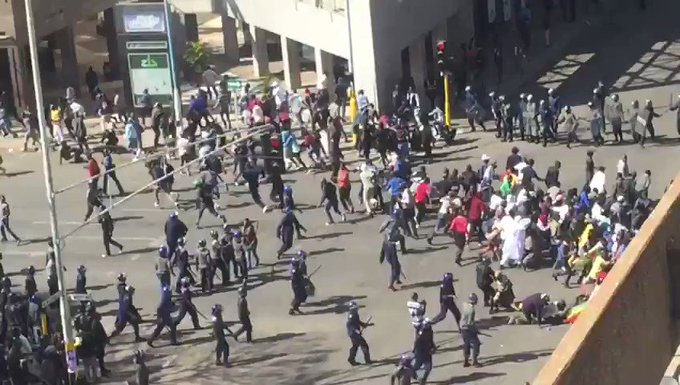 Life ‘worse than under Mugabe’

The demonstrations were called to protest at Zimbabwe’s worsening economic situation. Power cuts last for up to 18 hours a day and inflation is on the rise.

“Life in Zimbabwe today is worse that it was under [former president] Robert Mugabe,” MDC politician Fadzayi Mahere told the BBC.

“People are marching against the continued hardship that they face. The cost of living has soared exponentially. We’re back into hyperinflation.”

She said that democratic freedoms were also under threat.

Earlier this week, at least six civil society and opposition members were allegedly abducted and tortured.

The Zimbabwe Human Rights NGO Forum says the victims were accused of mobilising people to demonstrate.

Human rights groups blame state agents for their disappearance, but the authorities have denied their involvement.

The UK and US have expressed concerns about the reports.

The protests would have been the first since January, when rallies against increases in the price of fuel ended in deadly clashes with troops, in which 12 people were killed.

The worsening economy has fuelled wider grievances with the governing Zanu-PF party under Mr Mnangagwa.

The current president swept to power in November 2017 after long-time leader Robert Mugabe was ousted in a military coup.

Mr Mnangagwa, a long-time ally of Mr Mugabe, won an election in July 2018 on a platform of democratic reforms and economic recovery after years of decline under Mr Mugabe.

But the mood of hope and change has diminished as Zimbabwe’s economy has faltered.

Inflation is at a 10-year high, shrinking Zimbabweans’ salaries and pensions. Shortages of fuel, power and water are widespread, and the price of bread has increased five-fold since April.

There have been fears, however, that protests in Harare and other major cities would lead to another police crackdown akin to January’s.