The Ethiopian prime minister, who was awarded the Nobel Peace Prize in 2019, has rejected a request for peace talks as the conflict in Tigray deepens.

But PM Abiy Ahmed said in a tweet that there would be no dialogue “until our efforts to ascertain the rule of law are achieved”.

Hundreds have died since the conflict in Ethiopia’s northern region erupted.

Last Wednesday, Mr Abiy ordered a military offensive after an army base in the Tigrayan capital, Mekelle, was taken over by forces loyal to the regional government of Tigray, following months of worsening tension between Tigrayan leaders and the federal government.

On Friday Mr Debretsion wrote to the AU asking for help. The chairman of the African Union Commission, Moussa Faki Mahamat, on Monday urged the federal government and the Tigray state authorities to engage in dialogue.

But on Tuesday Mr Ahmed said in a series of tweets that he wanted “to assure Ethiopians again” that there would be no dialogue until after rule of law was achieved.

He added: “Our law enforcement operations in Tigray are proceeding as planned: operations will cease as soon as the criminal junta is disarmed, legitimate administration in the region restored, and fugitives apprehended & brought to justice – all of them rapidly coming within reach.”

How many people have died in the fighting?

It is difficult to say but reports indicate hundreds of deaths on both sides.

The claim has not been independently verified.

Meanwhile, 17 military personnel, including senior officials, have been arrested, the federal police say.

What other impact has the fighting had?

Officials in Sudan, which shares a border with the Tigray region, say at least 6,000 Ethiopians have arrived in the country. 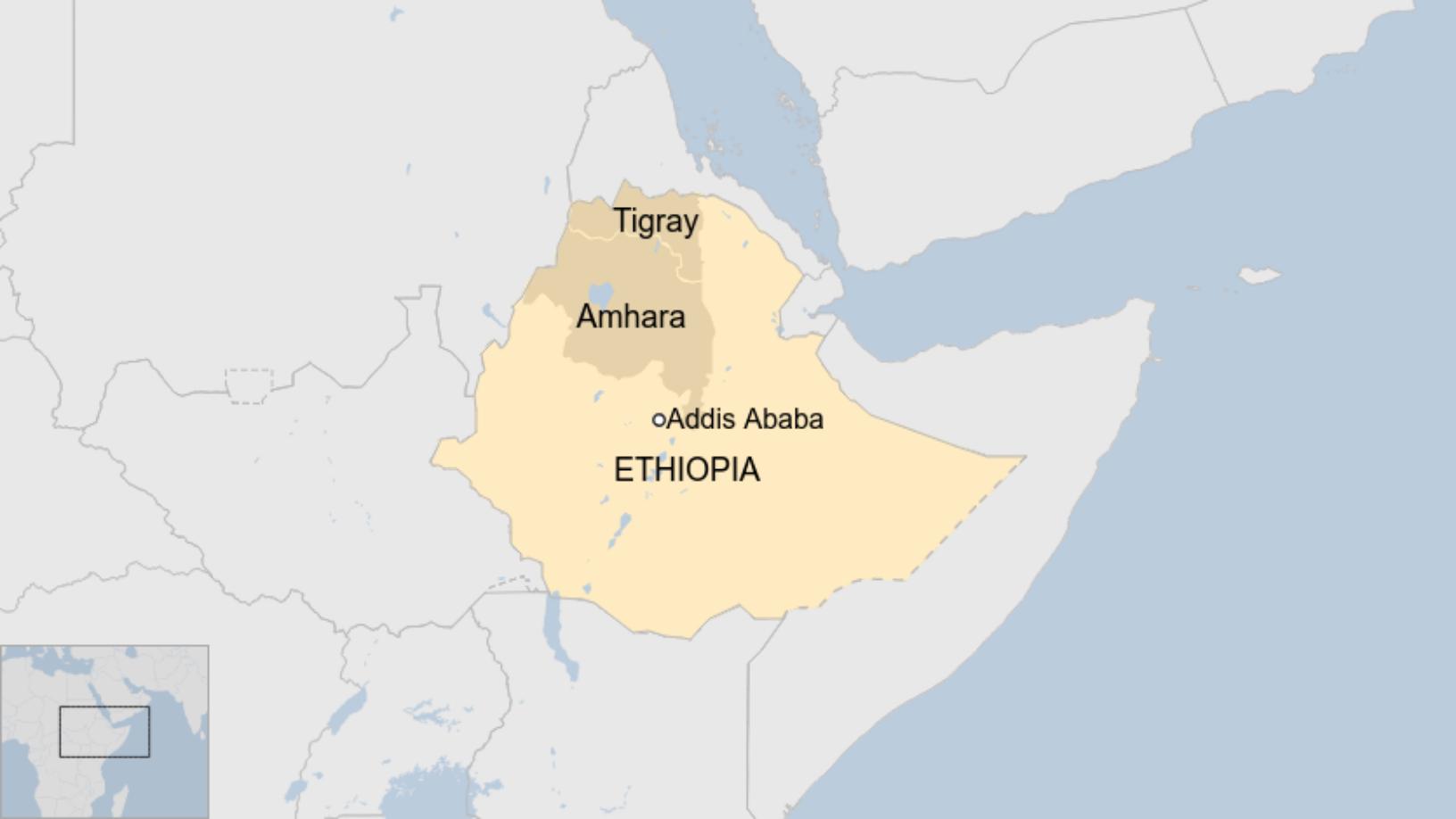 The Sudanese authorities are preparing for a further 200,000 people to cross in the coming days.

Al Sir Khalid, a commissioner for refugees in Sudan’s Kassala state, told the BBC’s Focus on Africa programme that some of those fleeing had walked for two or three days to escape “bombardment”, and that they included Ethiopian soldiers.

The federal government has cut off the phone lines and internet, Alula Solomon, the director of a Tigray media house based in the US told BBC Newsday.

His family, who live in Tigray the border near Sudan, were able to contact him by using Sudanese telephone lines. They have now fled to Sudan.

Are other countries involved in the conflict?

On Tuesday, Mr Debretsion accused the neighbouring Eritrean government of launching attacks on the Tigrayan state.

The accusation was denied by both the Eritrean government and the Ethiopian national army.

Mr Abiy won the 2019 Nobel Peace Prize for ending a two-decade conflict with Eritrea, which began when the TPLF dominated the Ethiopian government. Relations between the TPLF and Eritrea remain extremely bad.

What is behind the conflict?

The TPLF was the most powerful bit of Ethiopia’s ruling coalition for many years but Mr Abiy curbed its influence after winning power in 2018 on the back of anti-government protests.

Relations got worse last year after Mr Abiy dissolved the ruling coalition, which was made up of several ethnically based regional parties.

He merged them into a single, national party, the Prosperity Party, which the TPLF refused to join.

Tigrayan leaders say they have been unfairly targeted by purges and allegations of corruption, and say Mr Abiy is an illegitimate leader, because his mandate ran out when he postponed national elections due to coronavirus.

The simmering row boiled over in September after the TPLF defied the nationwide ban on elections, and held a vote which was declared illegal by the central government.

Why did Mr Abiy win the Nobel Peace Prize?

Mr Abiy won the prize in 2019 for his role in resolving the border conflict with Eritrea.

Ethiopia and Eritrea fought a bitter border war from 1998-2000, which killed tens of thousands of people.

Although a ceasefire was signed in 2000, the neighbours technically remained at war until July 2018, when Mr Abiy and Eritrea’s President Isaias Afwerki signed a peace deal.

N/R: One person arrested over violence in Karaga