The microfinance and Small Loans Centre (MASLOC) has presented 83 buses to the Ghana Private Road Transport Union (GPRTU) under a hire purchase agreement.

The 33-seater buses were procured for the union in 2016, but members considered the cost too high to guarantee them any meaningful returns.

Under the current arrangement, however, the government has reduced the price of the buses by 53.5 per cent to make them affordable to the GPRTU members. 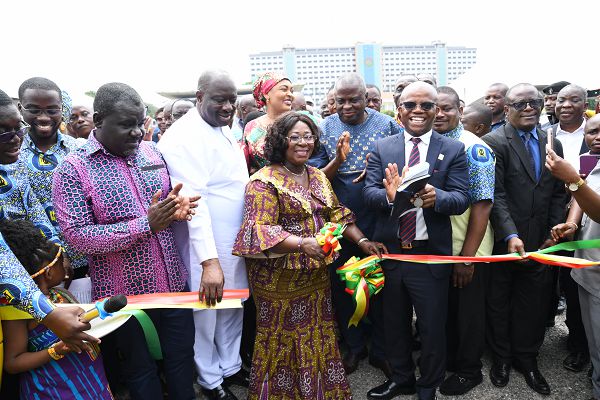 Mrs Akosua Frema Osei Opare (3rd left), the Chief of Staff, cutting the ribbon to officially inaugurate the buses to be handed over to the GPRTU. Looking on from left are Mr Kwaku Ofori Asiamah, Mr Seth Adjei Baah, Board Chairman of MASLOC, Mr Kwame Kuma and Mr Stephen Amoah, CEO of MASLOC.

Presenting the buses to the union in Accra on Tuesday, the Chief of Staff,  Mrs Akosua Frema Osei Opare, said when the government assumed office, it realised that the price of the buses was exorbitant.

She said investigations revealed that the bulk price of the buses was higher than the retail price at the local outlet of the supplier in Ghana and that price renegotiations with the supplier yielded only a one per cent reduction.

According to the Chief of Staff, the high price of the buses made it impossible for the GPRTU to acquire the vehicles for commercial operations, hence the intervention by the government.

She said the intervention was a demonstration of the commitment by the government to support the GPRTU to create more economic opportunities for its members and expressed the hope that beneficiaries would ensure regular maintenance of the buses to boost the transport industry and also offer affordable fares and comfort to commuters.

Mrs Osei Opare further urged drivers of the new buses to be role models on safe driving to help reduce road accidents in the country.

The Minister of Transport, Mr Kwaku Ofori Asiamah, expressed concern over the high number of ageing commercial
vehicles in the country and the resultant inconvenience it caused to passengers.

He, therefore, called on the GPRTU to purchase the buses to augment its fleet and also ensure the safety of passengers by engaging competent drivers, as well as adhere to a strict maintenance protocol, to help prevent accidents.

The Chief Executive of MASLOC, Mr Stephen Amoah, said the centre had been able to establish 200 district offices and  disbursed GH¢600 million since 2017.

He said 70 per cent of loans given by the centre had been offered to women, with a recovery rate of 65 per cent.

He added that very soon operations at MASLOC would be automated nationwide with an integrated information and  communications technology (ICT) system.