Vice – President Dr Mahamudu Bawumia has told a group of Canadian investors that Ghana is the best investment destination in Africa.

According to him, not only did the country’s political stability, security, as well as benign legal and regulatory environment, offer the best investment climate but also its large domestic market and macroeconomic stability made it the investment destination of choice on the African continent.

Touching on the supportive legal regulatory environment in Ghana, he said: “Ghana, ranked 48th (out of 126 countries) on the World Justice Project’s 2019 Rule of Law Index, provides a haven where investments are protected under a fair and commercially aware judicial system.”

In addition to that, he said, other noteworthy global comparisons presented positive judgements on the investment potential of the country.

“For instance, Ghana has been ranked ahead of countries such as South Africa in the 2019 A.T. Kearney Global Services Location Index (GSLI), a measure of the attractiveness of a location for offshore services,” the Vice-President said.

He said Ghana had maintained a consistent position as the second highest ranked country (out of 20) in the Absa/Barclays Africa Group Financial Markets Index for two years running.

The country was also ranked as the fourth highest (out of 25) African country in Ernst & Young Africa’s Attractiveness Survey (2017), ahead of Cote d’Ivoire, Mauritius, Rwanda and Nigeria, he added.

According to Dr Bawumia, Ghana’s large domestic market and the enforcement of the African Continental Free Trade Area (AfCFTA) suggested that its domestic market was no longer confined to West Africa.

“This makes Ghana the potential capital of Africa’s commercial, trade and investment future. Already, Ghana hosts the headquarters of several multinational companies serving the over 350 million people in the ECOWAS Region.

“The multiplier effects of hosting AfCFTA provides an even greater opportunity for businesses to rapidly launch into the rest of Africa from Ghana,”he noted.

Vice-President Bawumia further noted that “the successful implementation of AfCFTA will have a combined consumer and business spending of $6.7 trillion in 2030, boost manufacturing and industrial development in Africa and raise intra-African trade by 15 per cent to 25 per cent or $50 billion to $70 billion by 2040, compared to an Africa without the AfCFTA, all of which will be coordinated and directed from institutions, personnel and resources based out of Ghana”.

He also stated that with the country committed to economic transformation through digitisation, “the development of soft infrastructure platforms, the national identification system, the digital address system, a paperless port system, an e-justice system and interoperability in the payment system have all been driven strongly by the government but implemented fully by the private sector and provided ample opportunities for financial technology (FinTech) companies”. 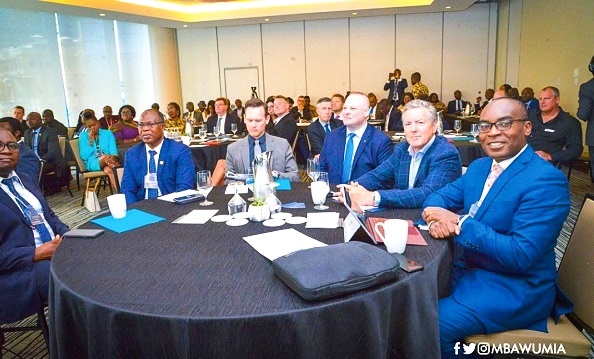 The Chief Executive Officer (CEO) of the Ghana Investment Promotion Centre, Mr Yofi Grant, as well as the Minister of Business Development, Dr Mohammed Awal, took turns to market Ghana to the investors.

According to Mr Grant, Ghana’s economic gains and sustainable macroeconomic stability should be of interest to investors.

He mentioned tax cuts, including the more than 17 taxes that had either been abolished or reduced by the government, a cumulative reduction in electricity prices of 11 per cent and the suspension of Import Value Added Tax of 15 per cent on 64 commodity groups, each of which was made up of hundreds of individual products, as some of the direct policy interventions by the government to spur growth in investment.

Other speakers at the summit were the CEO of the Canada-Africa Strategic Investment Group Inc., Dr Edward Akuffo; the acting Mayor of the City of Vancouver, Councillor Sara Kirby-Yung, and Ghana’s High Commissioner to Canada, Nii Ayikoi Otoo.