Musician will.i.am says a Qantas flight attendant was “racist” towards him during a flight from Brisbane to Sydney.

The Black Eyed Peas band’s frontman tweeted that he was singled out when he missed a plane announcement to put his laptop away.

“There was a misunderstanding on board, which seems to have been exacerbated by will.i.am wearing noise cancelling headphones and not being able to hear instructions from crew,” a spokesman said.

“We’ll be following up with will.i.am and wish him well for the rest of the tour.”

Sharing his story with his 12.8 million Twitter followers, will.i.am tweeted, “I’m sorry to say me and my group have experienced the (sic) worse service due to an overly aggressive flight attendant…”

“I don’t want to believe she [is] racist. But she has clearly aimed all her frustrations only at the people of colour”.

After the plane landed, the singer was met by police at Sydney airport on Saturday.

In subsequent tweets, he added: “I was intimidated by 5 police when I landed…for what?” 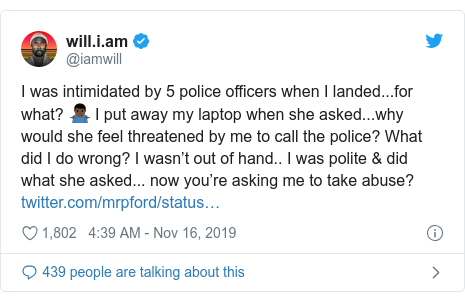 In his tweets, the star named the attendant involved in the row and shared an image of her and an Australian federal police officer.

A passenger who said she was on board the flight backed the star’s account. 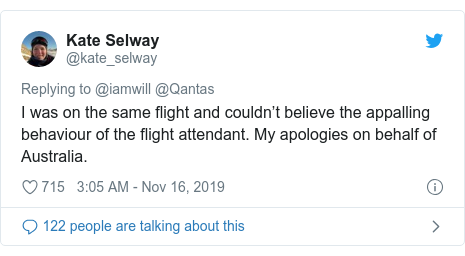 But will.i.am was criticised by others for naming the Qantas employee to his followers. The singer would later tweet urging followers not to target the woman.

Will.i.am is currently on tour in Australia.