President Nana Addo Dankwa Akufo-Addo on Wednesday urged the newly elected President of the Ghana Football Association (GFA), Mr Kurt Okraku, to adhere to the principles of accountability, transparency and decentness to steer football in Ghana to its winning ways.

He assured him that as the Chief Executive of the nation, the GFA and its President would have his unalloyed support so that they would take Ghana football back to the glorious ways that characterized it years back.

President Akufo-Addo made the call when he received Mr Okraku and some members of his team at the Jubilee House in Accra Wednesday.

President Akufo-Addo advised that it would not be easy, because football was an area where people would hail him one day and crucify him another day and urged him to stay true to the principles he espoused.

President Akufo-Addo said he was excited when he heard of the completion of the GFA elections, “and we had a new young, vibrant boss of the GFA, I was very happy about it. Everything I have heard about you confirms that for me”.

He made it clear to the newly elected GFA President that he had a very big task ahead of him, especially in a country where almost everybody was a football expert who would sit in their homes and state who should have been selected and who should not have been selected.

He said he preferred those who walk to the sound of their drum and urged him to listen to himself and make sure that the decisions he would take were in consonance with what was his understanding of what was best for Ghana football and what were the best standards he would want to uphold. 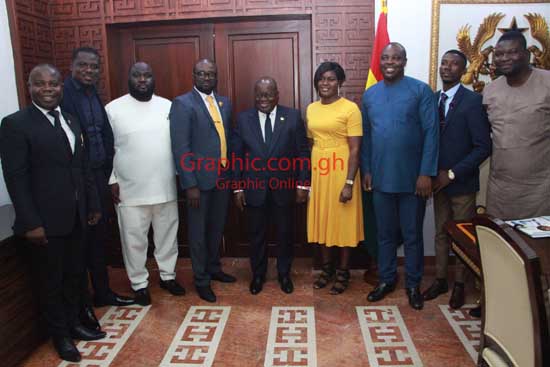 President Akufo-Addo said he was distressed when allegations of corruption in the sport came up which prompted him to intervene but added that “I had no interest in wanting to control Ghana football, that was for football people”.

He said he felt that government was duty-bound to step in and take some action, stop the rot and hopefully institute reforms that would enable Ghanaian football to take on a new leaf and begin a new journey.

He said, fortunately, when the FIFA boss Infantino came to Ghana, they both found a meeting of minds and that is what led to the establishment of the Normalization Committee.

President Akufo-Addo said all the claims that the country would be sanctioned because of the actions the country had been taken vanished when the FIFA boss came to Ghana and he worked together with the FIFA boss to establish the Normalization Committee, which was a transitional arrangement that would lead to a new constitution and a new GFA Executive to take Ghanaian football back to where it should be.

President Akufo-Addo described the meeting with the new GFA President as a very happy day for him because he remained a great lover of the sport and was aware of the great traditions of the discipline that the country had built over the years.

He said he started watching football long before the GFA President was born and had seen the evolution of Ghana football from the time the stadium was at Fadama all the way through to the period of C.K. Gyamfi, James Adjei, Baba Yara, Aggrey Fynn to the modern greats, Abedi Pele.

Mr Okraku stated that he was committed to ensuring that Ghana had a football association that embraced all the principles of good governance, transparency, accountability, good internal audit system and a full-time compliance department.

He said these would ensure that “we reposition the product offering so that corporate Ghana and the direct consumers of our sport, which is Ghanaians football people, will love our sport again.”

He expressed the hope that that the government led by President Akufo-Addo would continue to support the association just as it had been with football many years and added that it was their commitment to achieving the President’s goal of ensuring that the sport became the envy of many.

“It is my individual promise to work closely with the government to ensure that we deliver our sport and make it consumable again,” Mr Okraku stated.